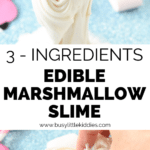 An easy 3-ingredient Marshmallow Slime Recipe with an edible version for a fun sensory play activity with young kids.

Marshmallow slime is a fun, soft, stretchy dough for kids sensory play activities. It’s mainly made of melted marshmallow and a few others ingredients.

How to make marshmallow slime ?

It is super easy to make a fun edible marshmallow slime at home. The ingredients you need are:

Disclaimer: Cornstarch is not toxic, but it’s still not to be taken in large amounts! This slime won’t hurt your little ones if they put some in their mouth, but don’t turn it into a full-on breakfast!

First, place the jumbo marshmallows into a large microwave-safe mixing bowl. Place the bowl in the center of the microwave and microwave on high power 900W for 30 seconds until the marshmallows puff up and double in size.

The melted marshmallow mixture is very hot, so wear gloves to remove the bowl from the microwave. Then, stir in vegetable oil. It won’t dissolve well in the mixture but it helps unstick the marshmallow mixture from the bowl. If you want to color your slime, stir in a few drops of food coloring now.

Stir in cornstarch and play!

Now, add corn starch, one tablespoon at a time, until your slime gets firmer, less sticky and easy to handle by hand.

How to store marshmallow slime?

Unfortunately, marshmallow slime doesn’t store very well. It hardens with time even if you store it in a sealed container.

How to soften marshmallow slime?

The lifespan of marshmallow slime is very short. Usually, after 20 minutes, the texture turns hard, and it’s not fun to play with it.

This is a natural chemical reaction. The more you play, stretch, or knead the slime, the fewer water molecules are left in the marshmallow, and it hardens.

A great way to soften marshmallow slime is to bring it back to the microwave-safe bowl and microwave for 10 seconds. Then, stir with a spoon and add more corn starch if it becomes sticky. Finally, play by hand when it cools down.

However, it’s not safe to eat raw cornstarch for many reasons. It can carry harmful bacteria and if eaten in large amounts. It can generate diseases like anemia. If you want to make edible slime, use only ingredients that are safe to be eaten raw. It means replace cornstarch with powdered sugar.

How to make edible slime with marshmallow?

However, this simple swap impacts the slime texture. The texture of edible marshmallow slime made with powdered sugar is stickier, and you may have to add more powdered sugar to reach a firmer texture.

This option will be a high-sugar slime, so even if it’s edible, don’t let your child eat a lot of it! Sugar is addictive, bad for your kids’ teeth and growth.

How to clean your fingers from sticky marshmallow slime?

The best way to unstick marshmallow slime from hands, surfaces, or clothes is with hot water. Marshmallow slime is pure sugar, so it dissolves very well with water. Rub your hands under lukewarm water, and the slime is going to melt and disappear.

You can add many sensory things in this slime recipe to engage more senses.

For example try adding 1/2 cup of: 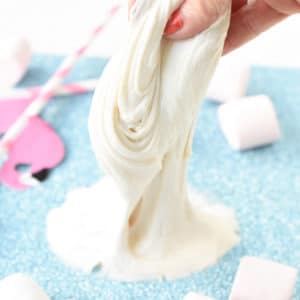 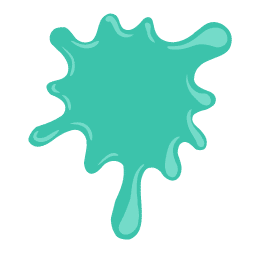